The realm of Soviet cinema is woefully underrepresented here on Listverse, and is in general not as well known as Italian or French cinema. The Soviet Central Government primarily viewed film as a way to control the masses, and employed censors to make sure films adhered to party policies of social realism. That being said, many directors risked severe punishment in order to produce films that might not fit with official party lines, but were important nevertheless. I have only highlighted one film per director, but where possible I have included their other notable works. The list, in no particular order: 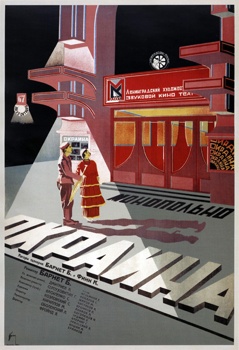 Boris Barnet’s first sound film is an underrated classic. The plot is set in 1914, and revolves around a German prisoner of war who is sent to a remote Russian village. The story is told in a series of episodes that depict the lives of the villagers as well as the soldiers on the front lines, as they deal with the war and the coming revolution. The colorful characters and impressive use of sound make this a must see for any fan of 1930’s cinema. Other works by Barnet include The Girl with the Hat Box and By the Bluest of Seas.

Director Dziga Vertov paved the way for cinéma vérité, or ‘truth cinema’ (think Woodstock, Hoop Dreams, and countless other documentaries) as a style of filmmaking, and nowhere is this more evident than in his experimental film Man with a Movie Camera. A film with no plot and no actors, Vertov attempts to show Soviet citizens at work and at play through the unfiltered lens of his camera. Vertov employed numerous techniques, including extreme close ups and tracking shots, to demonstrate his belief that film could go anywhere. The original release was silent and was accompanied by live music in theaters, since then various soundtracks have been added on (the soundtrack of the version on Netflix is very good – the one in the clip above is by Michael Nyman). Other works by Vertov include his Kino-Pravda newsreel series and Three Songs About Lenin.

The third film in Alexander Dovzhenko’s “Ukraine Trilogy” (along with Zvenigora and Arsenal), Earth is a symbolic silent film that deals with life, death, sex, violence, and other issues in a Ukrainian farming village. The farmers have to deal with greedy Kulaks (wealthier peasants), industrialization, and collectivization as their way of life is drastically changed. Dovzhenko’s use of montage is well done, and his ambiguity concerning the Soviet Revolution not only got him in trouble with the censors, but makes his film that much more important. Along with the other two movies of the Ukraine Trilogy, Dovzhenko is known for Ivan and Aerograd.

Like Earth, Storm Over Asia is a silent film that forms part of a trilogy. Vsevolod Pudovkin’s “Revolutionary Trilogy” consists of Mother, The End of St. Petersburg, and Storm Over Asia; while all three are considered masterpieces and would have been suitable for this list, I personally enjoyed Storm Over Asia the most. The story takes place in 1918 and focuses on a Mongol herdsman who suffers at the hands of the British occupiers. He joins forces with Soviets fighting the British, is discovered to be a direct descendent of Genghis Kahn, and eventually leads a resistance movement to drive the occupiers out of his country. Despite being a propaganda piece, Pudovkin’s use of montage and engaging storyline about the power of the individual make for a great movie.

One of Sergei Parajanov’s two masterpieces (the other is The Color of Pomegranates), Shadows of Forgotten Ancestors is a highly symbolic, beautiful film. The story is set in the Carpathian mountains, and has been described as a Ukrainian Romeo and Juliet- if Romeo had lived after Juliet’s death. Ivan falls in love with Marichka, the daughter of the man who killed his father. As his mother’s only surviving child, he leaves the village to work as a hired laborer and provide for her. However, before he can return to Marichka, she falls to her death while attempting to rescue an errant lamb. The story then follows Ivan through his descent into despair, marriage to the sensual Palagna, and Palagna’s inevitable betrayal. The film is shot in the Hutsul dialect and portrays Hutsul life and culture. Parajanov’s mesmerizing camerawork and color palette make this movie unforgettable.

This film won the Palm d’Or at the 1958 Cannes Film Festival, one of only two Soviet films to do so. Mikhail Kalatozov’s anti-war movie depicts the trauma and suffering the average Soviet citizen went through during WWII. Veronica and Boris are happily in love, until the war tears them apart. Boris is sent to the front lines, and everyone quickly loses touch with him. Meanwhile, Veronica tries to ward off existential despair while Boris’ draft-dodging cousin, who is in love with her, makes increasingly forceful advances. The Cranes are Flying is a superb drama; Kalatozov’s other famous work, I Am Cuba, has previously been featured on Listverse and is also great.

The only movie on this list I haven’t seen, but I felt it deserved a place here if only because of the sheer enormity of the project. The film took seven years to shoot, at a cost of over $100 million (with inflation taken into account it would cost over $700 million today, making it the most expensive film ever made). The original Soviet release was in four parts, totaling 484 minutes (8 hours!); subsequent releases shortened the film somewhat. According to the Guinness Book of World Records one battle scene used 120,000 soldiers, making it one of the largest battles scenes ever filmed. Sergei Bondarchuk’s epic was nominated for two Academy awards, winning one of them and a Golden Globe in the category of Best Foreign Language Film in 1969.

Definitely not for the faint of heart, Elem Klimov’s Come and See is a psychological war movie that makes Apocalypse Now look like child’s play. Florya, a young Belorussian boy, eagerly signs up to fight the Nazis invading his homeland during WWII. As the film progresses, he witnesses horror after horror as his naïve eagerness to fight gives way to disgust at the chaos around him. The visual and sound effects are amazing, and the acting is terrifyingly good. Brutal and unflinching, Come and See is probably the war movie that comes closest to accurately depicting the phrase “War Is Hell”.

The movie that put Soviet Cinema on the map, Sergei Eisenstein’s The Battleship Potemkin is routinely cited as one of the most influential propaganda films of all time, and was even named the greatest film of all time at the World’s Fair in Belgium in 1958. The movie presents a dramatized version of the rebellion in 1905 when the crew of the Potemkin revolted against their Tsarist officers, and is often seen as an initial step towards the Revolution of 1917. One of Eisenstein’s many masterpieces, along with Strike, October, Que Viva Mexico, Alexander Nevsky, Ivan the Terrible Part I, and Ivan the Terrible Part II.

The film that inspired this list, Andrei Tarkovsky’s Solaris is a science fiction classic, and is one of my favorite movies. Psychologist Kris Kelvin is sent to a space station orbiting the planet Solaris, in order to check up on the crew and evaluate the mission, which has stalled because of the crew’s emotional stress. Once Kelvin reaches the station, he begins to experience strange hallucinations. The narrative moves slowly at times, but there is no denying the skill with which Tarkovsky deals with complex issues such as religion, humanity, and the nature of consciousness. Natalya Bondarchuck’s acting is also superb. Tarkosvky’s other films include Ivan’s Childhood, Andrei Rublev, The Mirror, Stalker, Nostalghia, and The Sacrifice.