Batman is one of America’s most beloved superheroes, and comic book’s first anti-heroes. Over the years he’s been in movies, video games and television and has gone through many changes. While virtually everyone knows something about Batman, there’s a lot that many don’t know. Here’s a list of some things you probably never heard about the Caped Crusader. 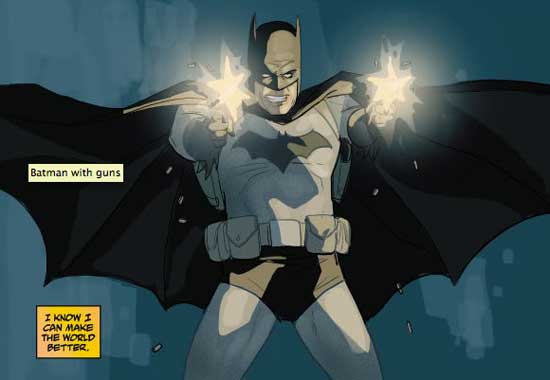 It took a little time for Bob Kane to refine the Batman character. Nowadays, Batman not only refuses to use guns, but hates them completely. This is logical, considering a gun killed his parents, and ever since he has stalwartly refused to use firearms in his crime fighting. However, in early issues Batman was something of a costumed Sherlock Homes, doing more detective work than fighting, but still carrying a six-gun at his side on his night patrols. Bob Kane soon changed this,  saying that Batman wearing a gun didn’t “Feel Right”. 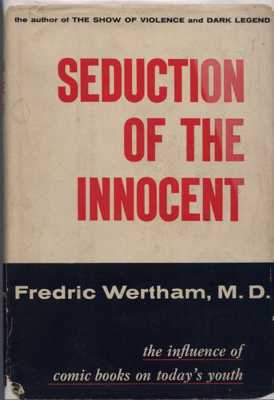 In 1954, Dr. Frederic Wertham a German-American Psychiatrist published the infamous “Seduction of the Innocent” A book that claimed comic books, with their violent imagery, were contributing to juvenile delinquency. Most of the book focused on crime and horror comics, but superhero comics were targeted in a few instances. One notorious account claimed that Batman and Robin were a depiction of a gay couple. Of course, this is ridiculous, but many think this claim is what inspired writers to make Batman (or more accurately, Bruce Wayne) a shameless womanizer to help chase off the rumor. 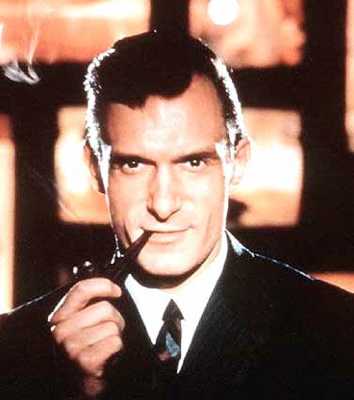 If there’s anything that Hugh Hefner is passionate about, aside from lovely ladies, it’s comic books. Hefner admits that, aside from publishing, one of his early projects was cartooning. Much later in life, he still liked to throw comic-book themed parties. In 1965, at the Chicago Playboy club, the Hef decided to have a Batman themed party that celebrated the campiness of the comic. He had actors dressed as Batman and Robin at the party, using the goofy “Golly gee whiz” lines from the comic, and the old Batman movie serials were screened. Little did Hef know, Yale Udoff , an ABC executive was attending. When he saw the crowd’s positive reaction to the goofy Batman and Robin, he immediately ran to a pay phone and called ABC with an idea for a new Batman TV show. So was born the campy but lovable 1960′s Batman series. 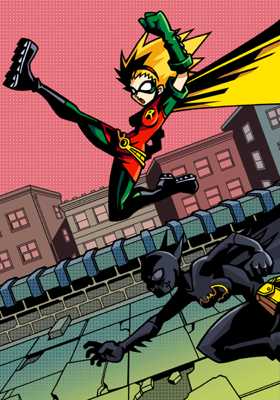 Everybody knows batman’s real name is Bruce Wayne. Robin is, of course, Dick Grayson. But there were other Robins, namely Jason Todd, Tim Drake and briefly, Stephanie Brown. The main villains are fairly well know: Catwoman is Selena Kyle, the Penguin’s name is Oswald Cobblepot, and The Riddler is Edward Nigma (E-Nigma . . .get it?) Two-Face’s name was Harvey Dent (that one’s obvious thanks to the recent movie), and Bruce Wayne’s loyal butler Alfred’s full name is “Alfred Pennyworth”. The name of the thug who originally murdered Batman’s parents was Joe Chill. More mysterious is the real name of The Joker, who for many years was a character without a real origin, and his real identity (if he could be said to have one) was never revealed. Only recently The Joker got an origin story, and thereby a real name: Jack Napier – named after Alan Napier who played Alfred in the Batman TV series. 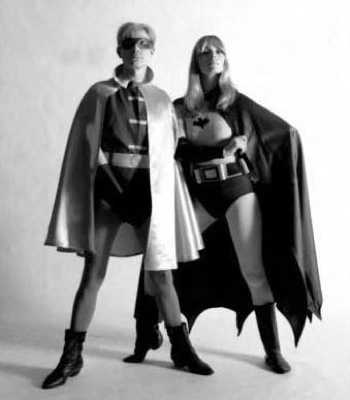 What was Batman’s first movie, ever? Well, casual fans will point out Tim Burton’s 1990 “Batman” but more savvy fans will no doubt point out that Adam West starred in a Batman movie in 1966 that was theatrically released. In truth, they’re both wrong. The first time Batman that was ever depicted in a movie that had any kind of release was “Batman, Dracula” in 1964, directed and produced by none other than Andy Warhol. Few people have seen it, and all prints are thought to be long gone, but what we do know is that the detective was played by longtime Warhol collaborator, Gregory Battcock, and it was completely unauthorized by DC Comics. Some surviving footage appeared in a later Warhol film “Jack Smith and the destruction of Atlantis” 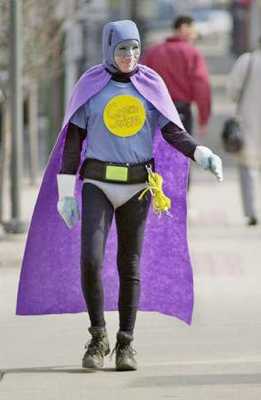 The story of Batman is one that’s easy to identify with. Any one of us who is angered by crime and the strong preying on the weak would love to do like good ol’ Bruce, put on a costume and clean up the streets. Oddly enough, in the town of Jackson, Michigan, one guy did exactly that. While his identity has never been revealed (like any good superhero, I suppose) “Captain Jackson” one day got fed up with street crime in his neighborhood, and decided to don a cape and cowl and patrol the streets to help out local law enforcement. While it seems a little crazy, the crime rate has dropped sharply since Captain Jackson took to the streets. He works closely with local law enforcement, and never confronts criminals directly, opting instead to report anything suspicious to the proper authorities, as well as fighting crime via a number of community service projects and awareness programs. Fight the good fight, Captain Jackson! 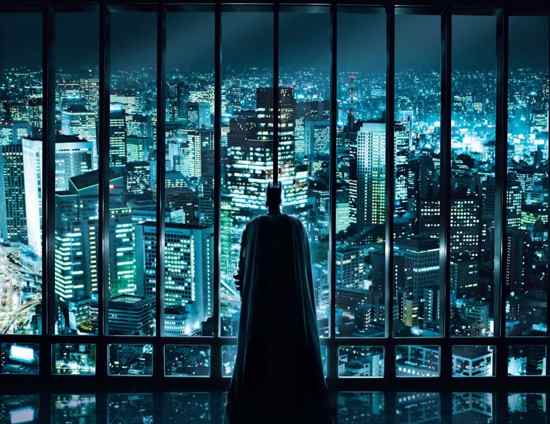 Originally, Batman took place is New York city, like many comic books of the time. Later, the writers decided to have it take place in a fictional city with a fictional history, so they could give the comic its own world. A writer opened a New York phone book randomly, saw “Gotham Jewlers” and so the name was born. The location of Gotham city has always been a bit hazy, sometimes it was depicted on the East Coast, and a few times it was located in the Midwest, near Superman’s hometown of Metropolis. However, popular canon now states that Gotham is located on the East Coast, specifically in the state of New Jersey. This has never been specifically stated in the comic, but in a few cases readers have spotted “Gotham City, New Jersey” on license plates, and once on a character’s driver’s licence. 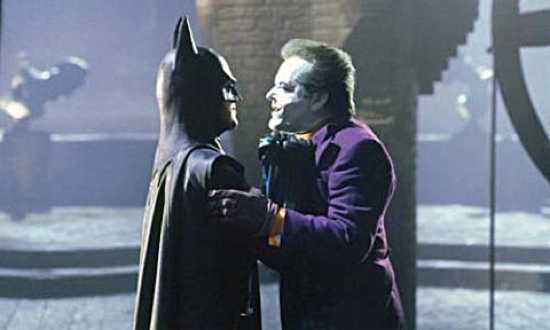 In Tim Burton’s 1989 film “Batman” there is a scene where a savvy Gotham City reporter is being ribbed by his co-workers about his obsession with Batman, thought by most to be an urban legend. At one point he’s handed a sketch of a silly-looking anthropomorphic bat in a tuxedo, with the words “Have you seen this man?”, much to the reporter’s chagrin. Next time you watch the movie, pause for a second and check the signature, this sketch was drawn by none other than Batman creator Bob Kane. I’m sure that one would fetch a bit on E-bay. 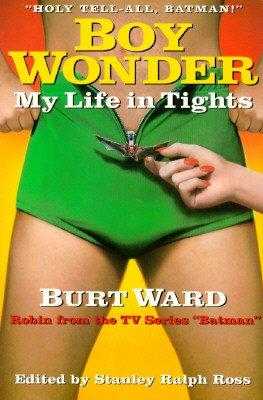 In 1991, Batman co-star Burt Ward, who played Robin alongside Adam West’s Batman, wrote a smutty tell-all book called “Burt Ward: My life in tights.” The book has been universally panned as poorly written, poorly published and full of outrageous lies. Burt Ward depicts himself as a genius super-athlete and an infamous lady’s man, and recounts endless sexual escapades of himself and Adam West. He claims there were always women on the set of the show, ready to rip off their clothing and do the deed with the dynamic duo. He depicts himself as a world-class lover and Adam West as totally unable to satisfy a woman in numerous near-pornographic passages. Adam West later revealed he read the book and took no offense, believing that no one could possibly believe half of it, saying that “Burt probably just needed the money”. Later Burt Ward admitted he was goaded by the publishers to make the book “More Interesting” and ‘fessed up to fabricating most of it. Shame on you, Boy Wonder. 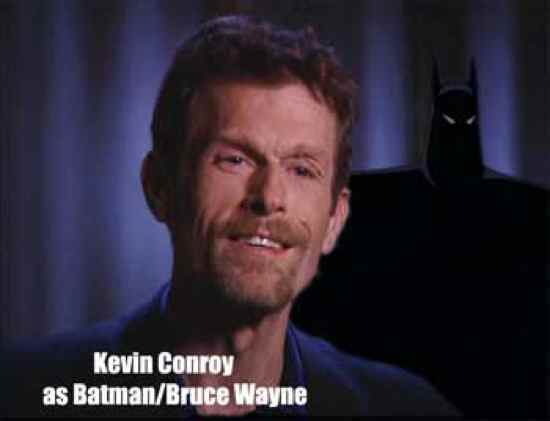 Over the years man big names in Hollywood have played Batman, but who’s played him the longest? That title goes to Kevin Conroy, who voiced the animated batman in Seven cartoon series, six video games and five animated movies – in total spanning 12 years. Many have named him as “The Voice of Batman” without question, and he brought some originality to the role with his unique take on the character. While in the comic it’s said Batman disguises everything about him when he dons the cape and cowl, before Conroy’s portrayal most people played Batman and Bruce Wayne as very similar. Conroy had the idea of noticeably altering the tone of his voice when he goes from crime fighter to millionaire playboy.